Oxford Airport has a Noise Abatement Scheme which periodically gets reviewed in accordance with any traffic mix evolution, or changes with issues and concerns amongst our local neighbours.   The scheme is available from our Operations desk via an e-mailed PDF or can be downloaded here.

The airport hosts an Airport Consultative Committee with representatives from local stakeholders and communities surrounding the airport.   Noise abatement policy will be discussed and revised through the committee periodically and then re-published as above.

Basic guidance is promulgated within the standard Aeronautical Information Publication (AIP) which in essence recommends the following:

NOTE: Should known pilots or crews be seen to be routinely in breach of the above guidance, they will risk being barred from residency at the airport.   Visitors seen to be in breach will be informed of any observed infringements where we are able to communicate with the pilots after the event and a copy of the Noise Abatement Scheme will be forwarded to them.

The primary direction is to avoid overflying the villages within and immediately outside our Air Traffic Zone (a 2nm radius around the airport) with the exception of those that are unfortunately already directly under the approaches (i.e. Tackley) or the fixed wing circuit (i.e. Kidlington).   Diagrams are contained within the Noise Abatement Scheme elaborating on recommended routes – in particular for helicopter operations in and out of the airport.   Below are some extracted images/slides that give more detail:

A general indicative diagram of the preferred access points, for helicopters in particular, are often promulgated in third party VFR flight guides, such as this: 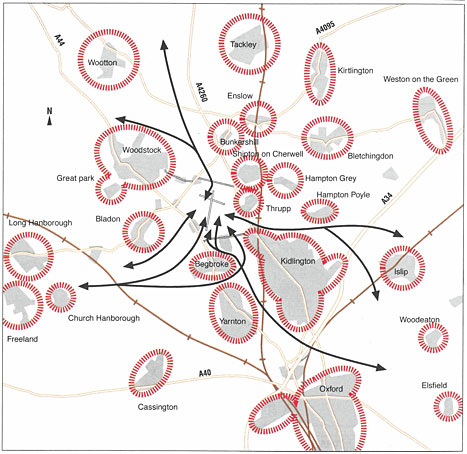 June 2021 – A reminder for those on the fixed wing circuit that they are to turn just south of Bletchingdon, unless on an extended downwind leg if instructed by Air Traffic Control

June 2021 – Night Flying & Circuits – we are currently restricting the number of evenings we are able to accommodate those doing night training and circuits this summer and as such capacity is limited and slots need to be organised in advance through Operations and ATC.   Regardless of capacity, no such activity will be permitted beyond 22:30.

July 2021 – There have been an increase in aircraft flying directly above Yarnton Village. This is either aircraft on departure from Runway 19 turning too soon to the east – they should turn after passing the village, or it is training aircraft in the main cutting corners on the circuit where they should be turning just before the water works or rail line south west of Yarnton, bringing aircraft south of the main village but close to Yarnton Manor and the church. See the circuit diagram here.